Felicity Jones is an English actress who has performed on stage, film, and television. She is known for her roles in television, such as The Worst Witch, The Diary of Anne Frank, Cape Wrath, Servants, and Weirdsister College, and in the films The Theory of Everything, The Invisible Woman, Cemetery Junction, Brideshead Revisited, Albatross, Like Crazy, and Rogue One: A Star Wars Story. Her theater credits include The Snow Queen, That Face, and Luise Miller. 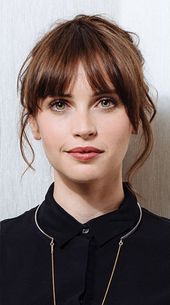 Felicity Jones Facts:
*She was born on October 17, 1983 in Birmingham, West Midlands, England, UK.
*Her parents are Julia and Gareth Jones.
*She started her professional acting career as a child, appearing at age 12 in the 1996 British television family film The Treasure Seekers.
*She graduated with a 2:1 (Second-class Honours, upper division) in English from Wadham College, Oxford in 2006.
*In 2011, she was named as the new face of Burberry and Dolce & Gabbana.
*She is a huge fan of the BBC gangster series Peaky Blinders (2013)
*From 2003 to 2013, Jones dated sculptor Ed Fornieles.
*She has been married to Charles Guard since June 30, 2018.
*Follow her on Instagram.