American professional tennis player who achieved a career-high singles ranking of World No. 7 on October 10, 2016 and has been consistently ranked inside the top 25 by the Women’s Tennis Association since early 2015. She reached the 2017 US Open finals, and won the 2019 Cincinnati Open. Born on February 17, 1995 in Rock Island, Illinois, to parents Christine and Rick Keys, she has an older sister, Sydney and two younger sisters, Hunter and Montana. She began taking lessons regularly at seven and began competing at the Chris Evert Tennis Academy at age nine. She has been dating American tennis player, Bjorn Fratangelo since 2017. 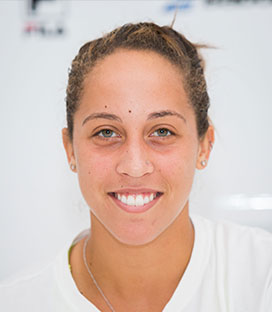 Madison Keys Facts:
*She was born on February 17, 1995 in Rock Island, Illinois, USA.
*Growing up, her favorite players were Roger Federer, Venus and Serena Williams.
*She debuted in the top 10 of the WTA rankings in 2016.
*She has won five WTA tournaments, all at the Premier level.
*She is very close friends with CoCo Vandeweghe and Sloane Stephens.
*She was inspired to start playing tennis after seeing the dresses Venus Williams was wearing at Wimbledon on TV.
*She is an ambassador for Fearlessly Girl, an organization dedicated to fighting bullying and cyber-bullying, with a focus on reaching out to high school girls.
*Follow her on Twitter, Facebook and Instagram.