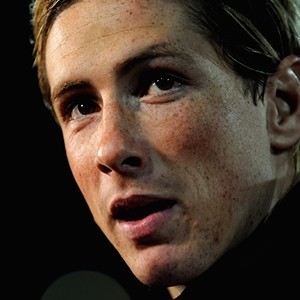 Born Fernando José Torres Sanz on March 20, 1984 in Municipality of Fuenlabrada, Spain, to parents Flori Sanz and José Torres, he has a sister named María Paz and brother named Israel. Torres started his career with Atlético Madrid, progressing through their youth system to the first-team squad. He married his childhood-sweetheart Olalla Dominguez on May 27, 2009 in El Escorial, Madrid. They have three children named Nora, Leo, and Elsa.

Fernando Torres Facts:
*He was born on March 20, 1984 in Municipality of Fuenlabrada, Spain.
*He began playing as a goalkeeper, the position his brother played in.
*He started his career as a professional football player at Atlético Madrid.
*He made his international debut for Spain against Portugal in 2003.
*He joined Premier League club Liverpool in 2007.
*He scored the winning goal for Spain in their 1-0 win over Germany in the Euro 2008 final.
*He moved to Chelsea for a fee of £50m in January 2011.
*He became one of the first players to win the Champions League, Europa League, World Cup and European League championships.
*Visit his official website: www.fernando9torres.com
*Follow him on Twitter, Facebook and Instagram.