Fiona Dourif is an American actress. She is best known for her portrayal of Bart Curlish on BBC America’s Dirk Gently’s Holistic Detective Agency, and for her role as Young Diane on Dustin Lance Black’s When We Rise. She has appeared in Showtime’s Shameless and in a recurring role on NBC’s The Blacklist. Her other notable television appearances include: The Purge, Thief, True Blood, and The Protector. She played Nica Pierce in the 2013 horror film Curse of Chucky and its 2017 follow-up Cult of Chucky. Born on October 30, 1981 in Woodstock, New York, she is the daughter of the Oscar-nominated voice actor Brad Dourif. Dourif started her career as the segment producer of documentaries on The History Channel and TLC. She made her television debut in 2005, appearing on three episodes of Deadwood. 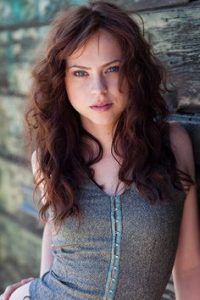 Fiona Dourif Facts:
*She was born on October 30, 1981 in Woodstock, New York, USA.
*Her parents are Jonina and Brad Dourif.
*She attended college in Ireland for three years.
*She started her acting career in 2005.
*Follow her on Twitter, Facebook and Instagram.