Fionnula Flanagan is an Irish actress and political activist. She is known for her roles in television, such as Brotherhood, Rich Man, Poor Man, How the West Was Won, Paddywhackery, and Lost, and in the films James Joyce’s Women, Transamerica, The Guard, The Others, and Waking Ned. For her performance in Walking Ned, she was nominated for a Screen Actors Guild Award. Born Fionnghuala Manon Flanagan on December 10, 1941 in Dublin, Ireland, she is the eldest of five children of Rosanna and Terence Niall Flanagan. Fionnula was raised speaking both English and Irish, and studied acting at the renowned Abbey Theatre. She was married to Garrett O’Connor from 1991 to 1995 (his death). 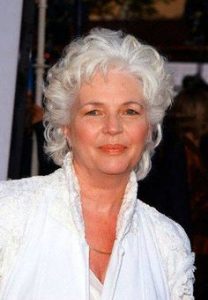 Fionnula Flanagan Facts:
*She was born on December 10, 1941 in Dublin, Ireland.
*Her father was a veteran Irish nationalist who also fought in the Spanish Civil War.
*She was educated in Switzerland and England.
*She used to work as an interpreter and translator in Italy.