Mikalah Gordon is an American singer who finished in eleventh place in the fourth season of the reality television series American Idol. She was the second finalist eliminated on March 25, 2005. She was a Co-Host of The Tyra Banks Show, American Idol, and American Idol Extra. As an actress, Gordon landed a guest-starring role on Fran Drescher’s new sitcom, Living with Fran. Born Mikalah Analise Gordon on January 14, 1988 in Las Vegas, Nevada, USA, to parents Rocky and Victoria Gordon, she has a sister named Tara and a brother named Sam. Her father is of Italian and Jewish descent, and her mother is Italian American. She was raised Catholic and attended St. Francis de Sales Roman Catholic School from 3rd to 8th grade. Prior to auditioning for American Idol, she worked at an oxygen bar. She currently resides in Los Angeles. 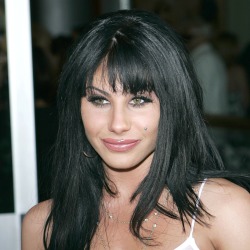 Mikalah Gordon Facts:
*She was born on January 14, 1988 in Las Vegas, Nevada, USA.
*Her dad, Rocky Gordon, was a jazz musician.
*She was eleventh-place finalist on the fourth season of American Idol.
*The youngest contestant ever to make it to the top 11 on “American Idol” at 16 years old.
*She was a contestant on the CMT reality show Gone Country in 2008.
*She used to work at an Oxygen bar in Las Vegas.
*She is often compared to actress Fran Drescher and Bette Midler.
*Visit her official website: www.mikalahgordon.com
*Follow her on Twitter, Facebook and Instagram.