Françoise Abanda is a Canadian professional tennis player who achieved a career-high singles ranking of World No. 111 on October 9, 2017, and a doubles ranking of world No. 197 on September 8, 2014. Turning professional in 2015, Abanda has won three singles titles and two doubles titles on the ITF Circuit. 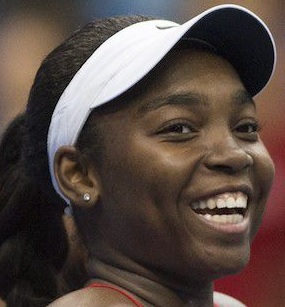 Born on February 5, 1997 in Montreal, Canada, to parents Cicle Assono Ahibena and Blaise Abanda, she is of Cameroonian descent. Françoise started playing tennis at age seven, after her older sister Élisabeth started playing two years earlier. She achieved a career-high combined junior rank of No. 4 on April 29, 2013. Her older sister Élisabeth also played tennis professionally and studied at Barry University.

Françoise Abanda Facts:
*She was born on February 5, 1997 in Montreal, Canada.
*She began playing tennis when she was seven years old.
*In 2009, Abanda became a member of Tennis Canada‘s National Training Centre in her hometown of Montréal.
*She made her professional debut in 2015.
*She plays right-handed and has a two-handed backhand.
*She has a career-high singles ranking of No. 111.
*Follow her on Twitter, Facebook and Instagram.