Fred Durst is an American rapper, singer-songwriter, actor, and film director. He is best known as the lead vocalist and lyricist of the American rap metal band Limp Bizkit, formed in 1994. Durst is also notable for his work in independent films and made his directorial debut with the 2007 film The Education of Charlie Banks. 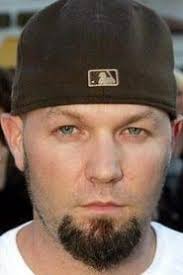 Fred Durst Facts:
*Born on August 20, 1970 in Jacksonville, Florida, he spent his childhood in Gastonia, North Carolina.
*At the age of 12, he took an interest in breakdancing, hip hop, punk rock and heavy metal, and began to rap, skate, beatbox and DJ.
*He served in the United States Navy for 2 years from 1988 to1990.
*Frontman and lyricist of the American rap metal band Limp Bizkit, with whom he has released six studio albums.
*He made his directorial debut with the 2007 film The Education of Charlie Banks.
*He was ranked at #71 in the Top 100 Heavy Metal Vocalists by Hit Parader.
*He has been married three times and has two children; a daughter named Adriana and a son named Dallas.
*He has a dog named Bizkit.
*Visit his official website: www.freddurst.com