Freya Mavor is a British actress and model. She is best known for portraying Mini McGuinness in the E4 teen drama Skins from 2011 to 2012. In 2013, she played the role of Princess Elizabeth of York in the period drama The White Queen for BBC One. Mavor has also played prominent roles in the films Not Another Happy Ending (2013), The Lady in the Car with Glasses and a Gun (2015), Cézanne and I (2016), The Sense of an Ending (2017), and Modern Life Is Rubbish (2017). Born on August 13, 1993, in Glasgow, Scotland, she raised in Inverleith, Edinburgh. Her father is an award-winning playwright James Mavor. She studied at Mary Erskine School in Edinburgh. She first became interested in acting after watching The Shining when she was ten years old, and her first acting experience was in a high school stage production of The Tempest. 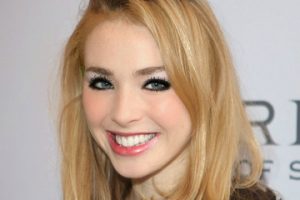 Freya Mavor Facts:
*She was born in Glasgow, Scotland on August 13, 1993.
*She of Irish and Danish descent on her mother’s side.
*She became a member of the National Youth Theatre in 2008.
*She is fluent in English, French and a bit of German.
*She knows how to play the piano.
*She was named the 78th sexiest woman in the world in 2012 by the UK edition FHM.
*Follow her on Twitter.