Future is an American rapper and singer, best known for his singles “Turn On the Lights”, “Move That Dope”, “Jumpman”, “Fuck Up Some Commas”, “Where Ya At”, “Low Life” and “Mask Off”. Future released his debut album, Pluto, in April 2012, followed by his second album, Honest in April 2014. His 2016 album Views, which includes a song featuring Future, was nominated for Album of the Year at the 2017 Grammy Awards. He has collaborated with other artists like Migos, Travis Scott, Rhianna, Chris Brown, 2 Chainz, Young Thug, Lil Wayne, DJ Khaled, Pharrell, 21 Savage, The Weeknd, Drake, and Metro Boomin. Born on November 20, 1983 in Atlanta, Georgia, USA, his real name is Nayvadius DeMun Wilburn. His brother, Rocko, is also a rapper. He attended Columbia High School in Decatur, Georgia. He began his career as a songwriter for Southern rappers like Ludacris. He is the father of five children. In 2018, he started dating Rapper Nicki Minaj. 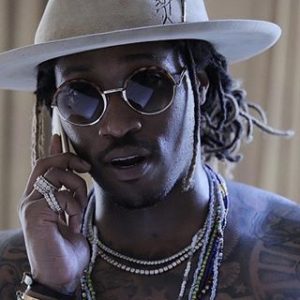 Future Facts:
*He was born on November 20, 1983 in Atlanta, Georgia, USA.
*He has a brother named Rocko who is also a rapper.
*He released the chart-topping album Pluto in April 2012.
*He has five children with five different women: Jessica Smith, India J, Brittni Mealy, singer Ciara, and Joie Chavis
*Visit his official website: www.futurefreebandz.com
*Follow him on Twitter, YouTube, SoundCloud, Facebook and Instagram.