Gabby Douglas is an American artistic gymnast who is the 2012 Olympic all around champion and the 2015 World all-around silver medalist. She won gold medals in both the individual all-around and team competitions. She was part of the Final Five at the 2016 Summer Olympics, where she won gold in the team competition. She was also a member of the gold-winning American teams at the 2011 and the 2015 World Championships. Born Gabrielle Christina Victoria Douglas on December 31, 1995 in Newport News, Virginia, to parents Timothy Douglas and Natalie Hawkins-Douglas, she was raised in Virginia Beach, Virginia. She started gymnastics at age 6, and won her first all-around gymnastics title at the Virginia State Championships when she was eight. Gabby left her family in Virginia, at age 15, to go to West Des Moines, Iowa to train for the Olympics. 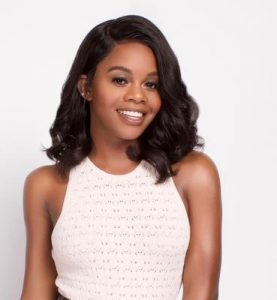 Gabby Douglas Facts:
*She was born on December 31, 1995 in Newport News, Virginia, USA.
*Starting at age 6, Gabby began training in gymnastics when her older sister convinced their mother to enroll her in gymnastics classes.
*She won gold medals for the U.S. in the team competitions at the 2012 and 2016 Summer Olympics.
*She became the first African-American woman to win the gymnastics all-around Olympic gold medal.
*She was named the 2012 Female Athlete of the Year by the Associated Press.
*Visit her official website: www.gabrielledouglas.com
*Follow her on Twitter, Facebook and Instagram.