GloZell is an American YouTube personality, rapper, comedian, and singer. She is best known for her videos on her YouTube channel ‘GloZell Green’, where she has more than 4.7 million subscribers and growing. Her viral YouTube videos includes “My Push Up Bra Will Help Me Get My Man” and “Cinnamon Challenge”. In 2013, GloZell released her debut iTunes single, “Pick Up After Your Dog”. She also had a small role as Little Debbie in Ralph Breaks the Internet in 2018. Born GloZell Lyneette Green on July 30, 1972 in Orlando, Florida, to parents Gloria and Ozell Green, she was raised with an opera singer sister named DeOnzell Green. In 1997, she graduated from the University of Florida with a bachelor’s degree in musical theatre, and moved to Los Angeles, California and became a member of a sketch comedy troupe called The Groundlings. On August 9, 2013, she married her manager, Kevin Simon, with whom she has a daughter named O’Zell Glorianna De Green Simon. 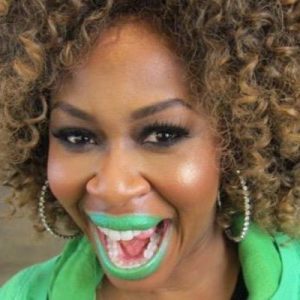 GloZell Facts:
*She was born on July 30, 1972 in Orlando, Florida, USA.
*Her parents are Gloria and Ozell Green.
*She interviewed President Barack Obama in a YouTube livestream hosted at the White House in 2015.
*She won the Lifestyle award at the 2016 Streamy Awards.
*She is good friends with Youtubers Colleen Ballinger & Frankie Grande (FrankGloCo).
*Visit her official website: www.glozell.com
*Follow her on Twitter, YouTube, Facebook and Instagram.