Gabrielle Union is an American film and television actress. She is best known for her roles in the films Bring It On, The Brothers, Deliver Us from Eva, Cradle 2 the Grave, Bad Boys II, Breakin’ All the Rules, Neo Ned, The Honeymooners, Think Like a Man, In Our Nature, Think Like a Man Too, Top Five, and The Birth of a Nation. She is also known for her roles in television, such as City of Angels, Something the Lord Made, Night Stalker, and FlashForward. In 2013, she began starring in the BET drama series Being Mary Jane. Born Gabrielle Monique Union on October 29, 1972, in Omaha, Nebraska, to Theresa and Sylvester E. Union, she has two sisters – one older and one younger. She earned a degree in sociology from UCLA. She began her career appearing on television sitcoms in the 1990s. Her breakthrough role came when she played Isis (cheerleader) in the 2000 film Bring It On, for which she won a 2001 Black Reel Award for Best Supporting Actress. In August 2014, she married NBA star Dwyane Wade. She was previously married to Chris Howard from 2001 to 2006. 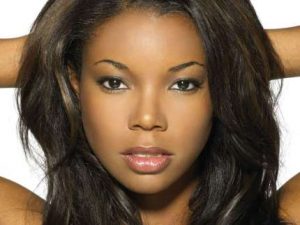 Gabrielle Union Facts:
*She was born on October 29, 1972, in Omaha, Nebraska.
*She was a cheerleader in the eighth grade.
*Her parents divorced after thirty years of marriage.
*She wanted to be a lawyer from childhood.
*She used to work as a model to pay off student loans.
*She speaks Spanish fluently.
*She is a spokesperson for Planned Parenthood’s breast health initiative.
*She was voted No. 52 in 2002 in Maxim’s “100 Sexiest Women” list.
*She ranked #67 in 2007 and #73 in 2008 in Maxim magazine’s Hot 100 list.
*She is a huge fan of the music group New Edition.
*She is friends with Mo’Nique, Sanaa Lathan, and Essence Atkins.
*Follow her on Twitter, Facebook and Instagram.