Gail Simmons is a Canadian trained culinary expert, food writer and television personality who has served as a permanent judge on BRAVO’s Emmy-winning series Top Chef, since its beginning in 2006. Previously, Simmons was the head critic on Top Chef Duels and host of Top Chef: Just Desserts, Bravo’s pastry-focused spin-off of the Top Chef franchise. She was also co-host of “The Feed,” which aired in 2014 on FYI, A+E’s new lifestyle network. In addition to her work on Top Chef, Simmons makes frequent television appearances on NBC’s Today and ABC’s Good Morning America, among others. She has also been featured in such publications as Los Angeles Times, Travel + Leisure, GQ, People, New York magazine, and more. Simmons’s first book, her memoir Talking With My Mouth Full: My Life as a Professional Eater, was published by Hyperion in February 2012. 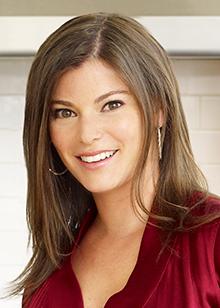 Born on May 19, 1976 in Toronto, Canada, to parents Renée and Ivor Simmons, she has two older brothers. Simmons attended and graduated from McGill University in Montreal, where she majored in anthropology and Spanish. She trained at New York’s Institute of Culinary Education and worked as an apprentice at the renowned French restaurant, Le Cirque. She has been married to Jeremy Abrams since August 17, 2008. They have two children: a daughter named Dahlia Rae and a son named Kole.

Gail Simmons Facts:
*Born on May 19, 1976 in Toronto, Canada, she is Jewish.
*She studied Spanish and anthropology at McGill University.
*She wrote her first food articles for the McGill Tribune.
*She has been serving as a judge on the Bravo reality TV show Top Chef.
*Her favorite childhood food is cotton candy.
*Visit her official website: www.gailsimmons.com
*Follow her on Twitter, Facebook and Instagram.