Marin Cilic is a Croatian professional tennis player who achieved a career-high singles ranking of World No. 3 on January 28, 2018. Turning professional in 2005, Cilic has won 18 ATP Tour singles titles, including a Grand Slam title at the 2014 US Open. 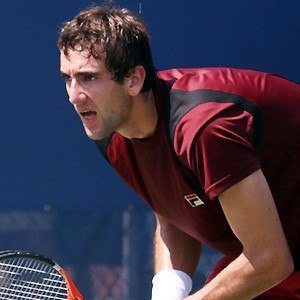 Born on September 28, 1988 in Međugorje, Bosnia and Herzegovina, to Herzegovinian Croat parents Koviljka and Zdenko Čilić, he was raised as a Roman Catholic. He has two older brothers named Vinko and Goran and a younger brother named Mile. Cilic’s father encouraged him and his brothers to become tennis players at a young age. He first came to international prominence by defeating world No. 2 Andy Murray in the fourth round of the 2009 US Open, and then reaching the semifinals at the Australian Open a few months later. He was also runner-up at the 2017 Wimbledon Championships and the 2018 Australian Open, losing to Roger Federer both times. He has been married to Kristina Milkovic Cilic since April 28, 2018. They have a son together.

Marin Cilic Facts:
*Born on September 28, 1988 in Međugorje, Bosnia and Herzegovina, he was raised as a Roman Catholic.
*Growing up, his idols were Ivan Ljubicic and Goran Ivanisevic.
*He turned professional in 2005.
*He won the junior French Open in 2005.
*He defeated Andy Murray at the 2009 US Open.
*He earned his first major championship after defeating Kei Nishikori in the US Open finals in 2014.
*Visit his official website: www.marincilic.com
*Follow him on Twitter, Facebook and Instagram.