Gal Gadot, who is of Polish-Jewish, Austrian-Jewish, German-Jewish, and Czech-Jewish ancestry, was born in Petah Tikva, Israel. She is an actress and model who won the Miss Israel title in 2004. Gal is also known for her appearances in the ‘Fast & Furious’ film series. Born on April 30, 1985, she is the daughter of of Irit and Michael Gadot. She has one younger sister, Dana. She has been married to Israeli real estate developer Yaron Versano since September 28, 2008. They have two daughters, Alma and Maya. 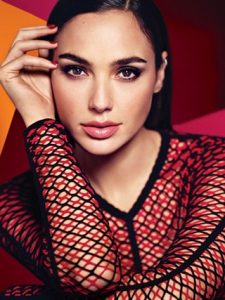 Gal Gadot Facts:
*She loves to play basketball, volleyball and tennis.
*Her first and second name respectively mean, “wave” and “riverbank”.
*Maxim magazine named her one of the top Hot 100 Women in the World in 2014.
*She made her acting debut in 2007 as a lead in the Israeli drama series Bubot.
*She is an avid motorcycle rider and owns a black 2006 Ducati Monster-S2R.
*She is the first non-American actress to play Diana Princess/Wonder Woman.
*She served for two years as sports trainer in the Israeli Defense Forces.
*She won the Miss Israel title in 2004, and represented Israel at the 2004 Miss Universe beauty pageant.
*Her ancestry includes Polish-Jewish, Austrian-Jewish, German-Jewish, and Czech-Jewish.
*Follow her on Twitter, Facebook and Instagram.