Stevland Hardaway Morris, better known as Stevie Wonder, is an American singer-songwriter, multi-instrumentalist, record producer and activist who recorded more than 30 U.S. top ten hits and received 25 Grammy Awards, one of the most-awarded male solo artists, and has sold over 100 million records worldwide, making him one of the top 60 best-selling music artists. His hit songs include “You Are the Sunshine of My Life,” “Superstition,” “My Cherie Amour,” “Living in the City,” “Boogie on Reggae Woman,” “That Girl”, “I Just Called to Say I Love You”, “Sir Duke,” and “Part-Time Lover.” Stevie Wonder was born in Saginaw, Michigan as Stevland Hardaway Judkins. He is the son of Calvin Judkins and Lula Mae Hardaway. Due to being born six weeks premature, Stevie Wonder was born with a condition called retinopathy of prematurity, which made him blind. 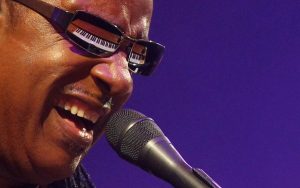 Stevie Wonder Facts:
*He has been blind since birth.
*He is a lifelong staunch liberal Democrat.
*He was voted the ninth greatest singer of the rock era in a Rolling Stone magazine poll in 2008.
*His song “Another Star” was chosen by BBC television as the theme tune for their coverage of the 2014 FIFA World Cup in Brazil.
*Connect with him on Facebook, YouTube and Myspace.