Gaten Matarazzo is an American actor and singer. He is best known for playing the role of Dustin Henderson in the Netflix series Stranger Things since 2016. He has also appeared in a number of Broadway stage productions, including Les Misérables, Into the Woods, and Priscilla, Queen of the Desert. In 2019, Matarazzo began hosting the short lived Netflix show Prank Encounters. Born Gaetano John Matarazzo III on September 8, 2002 in Little Egg Harbor Township, New Jersey, to parents Gaetano and Heather Matarazzo, he is of Italian descent. He has an older sister named Sabrina and a younger brother named Carmen. Matarazzo attended Pinelands Regional High School in Tuckerton, New Jersey. He began dating Lizzy Yu in 2018. 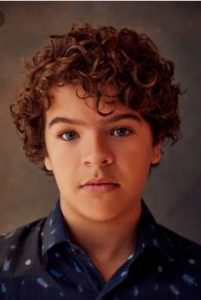 Gaten Matarazzo Facts:
*He was born on September 8, 2002 in Little Egg Harbor Township, New Jersey, USA.
*He was born with cleidocranial dysostosis (CCD), a delayed development of bones.
*He plays Dustin Henderson in the Netflix supernatural drama series Stranger Things.
*He is a vegetarian.
*In 2017, he became a spokesman for Verizon FiOS.
*Follow him on Twitter, Facebook and Instagram.