Gemma Chan is a British actress of film, television, and theatre and former fashion model. She is known for her roles in television, such as Secret Diary of a Call Girl, Humans, Sherlock, Fresh Meat, Doctor Who, and Brotherhood, and in the films Exam, Stratton, Shanghai, Pimp, Transformers: The Last Knight, London Fields, Jack Ryan: Shadow Recruit, Mary Queen of Scots, Submarine, Families and the 2018 Crazy Rich Asians. She portrays Minn-Erva in the 2019 Marvel Studios film Captain Marvel. Born on November 29, 1982 in London, England, she was raised in Kent. Her mother from mainland China and her father is from Hong Kong. She attended the Newstead Wood School for Girls and studied law at Worcester College, Oxford. She graduated in 2008 from the Drama Centre London. Chan made her acting debut in the independent horror serial When Evil Calls, and made her film debut in the 2009 psychological thriller Exam. She was in a long term relationship with comedian and Fresh Meat co-star Jack Whitehall from 2011 until 2017. 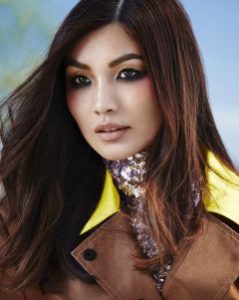 Gemma Chan Facts:
*She was born on November 29, 1982 in London, England, UK.
*She belongs to Chinese descent.
*She was a national level competitive swimmer.
*Follow her on Twitter and Instagram.