Genelia D’Souza is an Indian actress and model best known for her work in Telugu, Tamil, and Hindi films. She made her acting debut in Tujhe Meri Kasam which was released in 2003. Her notable film credits include Satyam, Bommarillu, Santosh Subramaniam, and Jaane Tu Ya Jaane Na. Genelia was born Genelia De Souza on August 5, 1987 in Mumbai, India into a Mangalorean Catholic family. Her parents are Jeanette D’Souza and Neil D’Souza. She has a younger brother, Nigel D’Souza, who works with the Bombay Stock Exchange. She married actor Ritesh Deshmukh on February 2012. They have two sons together. 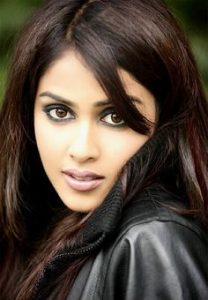 Genelia D’Souza Facts:
*She was raised as a Roman Catholic in the Bandra suburb of Mumbai.
*She studied management studies at St. Andrew’s College.
*She hosted the TV show Big Switch.
*Follow her on Twitter and Instagram.