Mary Lambert is an American singer, songwriter, spoken word artist and LGBT rights activist who rose to fame after writing and singing the chorus on Macklemore’s ‘Same Love’. She is best known for her hit song “She Keeps Me Warm.” Her debut EP, Letters Don’t Talk, was released on July 17, 2012, and reached at number 18 on the iTunes Singer/Songwriter charts. Her first studio album Heart on my sleeve was released in October 2014 via Capitol Records, which reached #29 on Billboard 200. Mary was born Mary Danielle Lambert in Seattle, Washington, District of Columbia, on May 3, 1989. Her mother is also a recording artist. 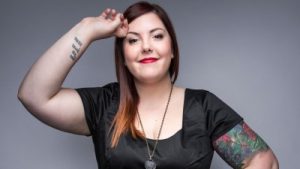 Mary Lambert Family Details:
Father: Unknown
Mother: Unknown
Spouse/Husband: Not yet
Children: No
Siblings: She has an older brother.

Mary Lambert Education:
She graduated from Mariner High School in 2007.
She studied music at the Cornish College of the Arts.

Mary Lambert Facts:
*She was raised as a Pentecostal.
*She performed with Madonna at the 2014 Grammy Awards.
*She used to work as a bartender and brunch waitress.
*She has a tattoo of the pansies on her left half sleeve.
*She was sexually abused during her childhood and gang raped at the age of 17.
*She auditioned for and was rejected by American Idol.
*Follow her on Twitter, Facebook, Google+, YouTube, and Instagram.