Gerina Piller is an American professional golfer who plays on the LPGA Tour. Turning professional in 2007, she earned conditional status on the LPGA Tour for 2010 and played the entire season on the Futures Tour, where she recorded seven top-10 finishes and a career-best tie for second at both the iMPACT Classic and the USI Championship. She finished fifth on the Futures Tour money list in 2010, earning her full playing privileges on the LPGA Tour for 2011. She appeared on the Golf Channel reality television competition The Big Break in 2009. Born on March 29, 1985 in Roswell, New Mexico, USA, to parents Rita and Alan Stevenson, she grew up with four siblings. She belongs to Mexican American descent. She attended Goddard High School and won the state golf championship in 2003 and also was an all-state volleyball player. She decorated career as a collegiate golfer at the University of Texas El Paso. Gerina was the 2007 Conference USA individual champion, Player of the Year and the UTEP Female Athlete of the Year. She is married to fellow golfer Martin Piller. Together they have one son, Ajeo James Piller. 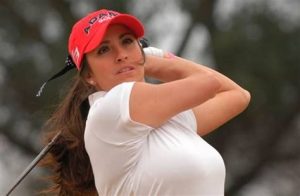 Gerina Piller Facts:
*She was born on March 29, 1985 in Roswell, New Mexico, USA.
*She is of Mexican American descent.
*She was only 15 when she started playing golf.
*She turned professional in September 2007 at age 21.
*Follow her on Twitter, Facebook and Instagram.