Giorgia Whigham is an American actress of film and television. She is best known for television roles as Kat in Netflix’s 13 Reasons Why, Beth in VH1’s Scream and Amy Bendix in the Netflix television series The Punisher. Her other notable television appearances include: Son of Zorn, The Orville, Animal Kingdom, and Dirty John. She has appeared in the films Pinky, Sierra Burgess Is a Loser, and Saving Zoë. Born on August 19, 1997 in New York, New York, to parents Stine and Shea Whigham, she has a younger brother. Whigham attended Charter High School of the Arts. Her breakout role was in 2016 as Nadia in the short film Pinky. 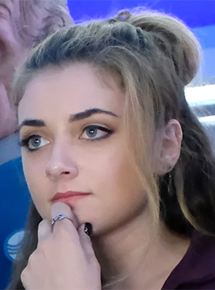 Giorgia Whigham Facts:
*She was born on August 19, 1997 in New York, New York, USA.
*She is the daughter of actor Shea Whigham.
*She debuted as Nadia in the 2016 short film Pinky alongside Ellery Sprayberry.
*She shares her birthday with Edward Norton and Robert Redford.
*She has three dogs, Nico, Lulu and Boris.
*Follow her on Twitter and Instagram.