Gizem Karaca is a Turkish Actress, model and beauty queen. Karaca placed second in the Miss Turkey competition in 2011, and represented her country (Turkey) at the Miss World 2011 pageant. Besides her career in modeling, Karaca also pursued her career as an actress. She made her acting debut in the romantic drama television series Eve Düşen Yıldırım as Muazzez, which was released in 2012. She played Güneş Sancaktar in the series Adını Feriha Koydum. She played Ezel in the 2014 film Seni Seviyorum Adamım. Born on September 7, 1992 in Istanbul, Turkey, to Münevver and Cüneyt Karaca, she spent much of her childhood in the USA and Canada. Her mother is Turkish of Albanian descent while her father is of Turkish who emigrated from Thessaloniki and immigrated to Turkey. She speaks Turkish, English and French fluently. After graduating from high school, she studied social sciences at Istanbul University. She studied acting at the New York Film Academy. On September 16, 2017, she married to Turkish businessman Kemal Ekmekci. 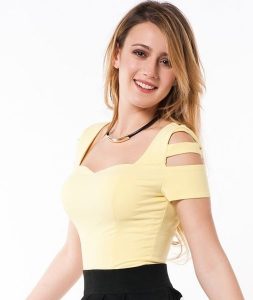 Gizem Karaca Facts:
*She was born on September 7, 1992 in Istanbul, Turkey.
*She spent much of her childhood in the USA and Canada.
*Besides her native Turkish language, she can also speak English and French.
*She finished second in the Miss Turkey competition in 2011, which selected her as Turkey’s representative for Miss World.
*She has a pet dog named Kito.
*Follow her on Twitter and Instagram.