Paula Abdul is an American singer-songwriter, actress, dancer and television personality. She is best known for her number one songs “Straight Up”, “Cold Hearted” and “Opposites Attract”. For “Opposites Attract”, she won a Grammy Award for Best Music Video. Her pop debut album, Forever Your Girl, took over two years to hit #1 on the Billboard 200 album sales chart—the longest an album has been on the market before hitting #1 and spent 10 weeks there. Paula is also famous for judging American Idol in the 2000s. Born Paula Julie Abdul on June 19, 1962 in San Fernando, California, USA to Lorraine and Harry Abdul, she grew up in the San Fernando Valley. She has one sister named Wendy. After graduating from Van Nuys High School, she studied broadcasting at the California State University, Northridge. Abdul’s career was bagan as an LA Lakers cheerleader and then became a venerable choreographer. She was married to Emilio Estevez from 1992 to 1994 and Brad Beckerman from 1996 to 1998. 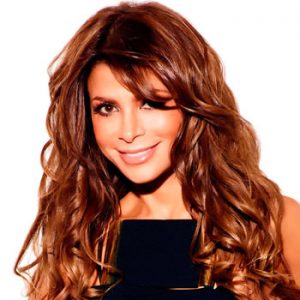 Paula Abdul Facts:
*Her parents got divorced when she was a child.
*She was a cheerleader while in high school.
*She was inspired to perform by Gene Kelly.
*She is a big fan of Brian Wilson and The Beach Boys.
*She was named #85 on VH1’s 100 Sexiest Artists.
*Visit her official website: www.paulaabdul.com
*Follow her on Twitter, Facebook and Instagram.