Glen Campbell was an American country music singer, guitarist, television host, and occasional actor best known for a series of hits in the 1960s and 1970s. Campbell was born on April 22, 1936 as Glen Travis Campbell in Delight, Arkansas, USA to Carrie Dell and John Wesley Campbell. He is the seventh son of 12 children. His father was a sharecropper of Scottish ancestry. He started playing guitar as a youth and credits his uncle Boo for teaching him the guitar. He was awarded a Star on the Hollywood Walk of Fame for Recording at 6925 Hollywood Boulevard in HOllywood, California. He married to Kim Campbell on October 25, 1982. They had three children. He was previously married to Sarah Davis, Billie Jean Nunley and Diane Kirk. 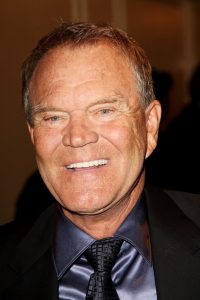 Glen Campbell Facts:
*He is the seventh son of 12 children.
*He performed the National Anthem at the Republican National Convention in 1980.
*He believed his singing voice improved after he quit smoking on 15 March 1992.
*Follow him on Twitter, Facebook and YouTube.