Mini Bio: Katerina Graham is an actress, singer, model, dancer and producer, best known for her starring role as Bonnie Bennett on The CW television series ‘The Vampire Diaries’. She has also played prominent roles in a number of films, including The Roommate, Addicted, The Parent Trap, Honey 2, 17 Again and All Eyez On Me. Katerina was born in Geneva, Switzerland, and raised in Los Angeles, USA. She is the daughter of a Liberian father and a Russian Jewish mother. Her father, Joseph, was a music executive. 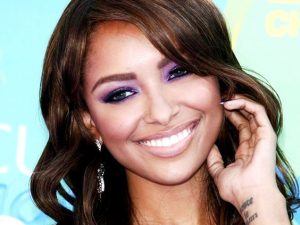 Relationships / Affairs / Boyfriend:
She was in a relationship with actor Cottrell Guidry from 2008 to 2014.

Katerina Graham Facts:
*Her father is Liberian, while her mother is Ashkenazi Jewish (from a family from Poland and Russia).
*Her parents divorced when she was 5.
*She was raised in her mother’s Jewish religion.
*She began her career at the age of 6 in the entertainment business.
*She strongly supports gay marriage.
*She speaks four languages; English, Spanish, French and Hebrew.
*She has a tattoo on her inner left wrist, which is the Latin version of “Know thyself”, nosce te ipsum.
*Follow Katerina Graham on Twitter, Facebook, YouTube and Instagram.