Golden Brooks is an American actress. She is best known for her portrayal of Maya Wilkes in the UPN/The CW comedy series, Girlfriends for which she received BET Award for Outstanding Supporting Actress in a Comedy Series in 2004, and well as two nominations for the NAACP Image Award for Outstanding Actress in a Comedy Series in 2003 and 2008. From 1998 to 2000, Brooks starred as CeCe Jennings in the Showtime comedy series Linc’s, and was cast as one of five leads on the TV One reality series, Hollywood Divas. Her film credits include Timecode, Impostor, Motives, Beauty Shop, The Inheritance, Something New and The Darkest Minds. In 2019, Brooks was cast in the series regular role on the TNT drama series I Am the Night. Born Golden Ameda Brooks on December 1, 1970 in San Francisco, California, to parents Barbara and Walter Brooks, she studied and taught ballet, jazz, and modern dance. She earned a Bachelor’s degree in Sociology from UC-Berkeley, where she minored in Theater. She obtained a Master’s degree at Sarah Lawrence College. She had a daughter in 2009 with her former boyfriend D.B. Woodside. 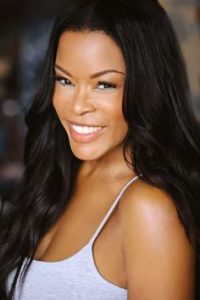 Golden Brooks Facts:
*She was born on December 1, 1970 in San Francisco, California, USA.
*Growing up, she was a figure skating competitor and won several trophies.
*A classically trained dancer, Brooks studied and taught ballet, jazz, and modern dance.
*She was educated at UC Berkeley and Sarah Lawrence College.
*From 2000 to 2008, she starred as Maya Wilkes on the CW sitcom Girlfriends.
*She had a cat named Saeku.
*Follow her on Twitter and Instagram.