Mandy Patinkin is an American actor, singer and voice artist. He is best known for his role as Inigo Montoya in Rob Reiner’s 1987 film The Princess Bride. He has also played prominent roles in the films Miloš Forman’s Ragtime, Barbra Streisand’s Yentl, Alien Nation, and Warren Beatty’s Dick Tracy. Patinkin is also known for television roles as Dr. Jeffrey Geiger on Chicago Hope, Rube Sofer on Dead Like Me, Jason Gideon on Criminal Minds, and as Saul Berenson in the Showtime series Homeland. He is also notable for his work in musical theater, originating iconic roles such as Georges Seurat in Sunday in the Park with George and Che in the original Broadway production of Evita. Born Mandel Bruce Patinkin on November 30, 1952 in Chicago, Illinois, to parents Doris and Lester Patinkin, he belongs to both Russian Jewish and Latvian Jewish descent. He did his schooling from South Shore High School, Harvard St. George School, and Kenwood High School, and attended the University of Kansas in Lawrence, Kansas for two years before being discovered. He briefly studied acting at New York’s Juilliard School of Drama, but dropped out to pursue work. In April 1980, he married actress and writer Kathryn Grody with whom he has two sons, Isaac and Gideon. 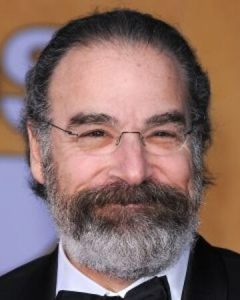 Mandy Patinkin Facts:
*He was born on November 30, 1952 in Chicago, Illinois, USA.
*He is of Russian Jewish and Latvian Jewish descent.
*He was raised in a conservative Jewish family.
*He began singing in the temple choir at age 9.
*He started singing in synagogue choirs at the age of 13-14.
*He graduated from Kenwood High School in Chicago, Illinois in 1970.
*In 1995, he won an Emmy Award for his role on the medical drama series Chicago Hope.
*He received a star on the Hollywood Walk of Fame at 6243 Hollywood Boulevard in Hollywood, California in February 2018.
*He is a big fan and collector of Lionel model trains.
*Visit his official website: www.mandypatinkin.org
*Follow him on Twitter, YouTube, Facebook and Instagram.