Govinda is an Indian film actor, comedian and former politician who works predominantly in Bollywood films. His first role was in the 1986 film Ilzaam. Since then he has appeared in a wide number of films, and is best known for his roles in films such as Coolie No. 1, Saajan Chale Sasural, Deewana Mastana, Hero No. 1, Dulhe Raja, Bade Miyan Chote Miyan, Haseena Maan Jaayegi, Kunwara, Jodi No.1, Kyo Kii… Main Jhuth Nahin Bolta, Akhiyon Se Goli Maare, and Partner. He has received twelve Filmfare Awards nominations winning two Filmfare Awards including a Special Jury Award and he has also won four Zee Cine Awards. He was a member of the Indian National Congress Party. He was born Govind Arun Ahuja in Thane, India in December 1963 to Arun Kumar Ahuja and Nirmala Devi. He has been married to Sunita Ahuja since 1987. They have two children, Yashwardhan and Narmada. He attended and studied business at Annasaheb Vartak College in Maharashtra, India. 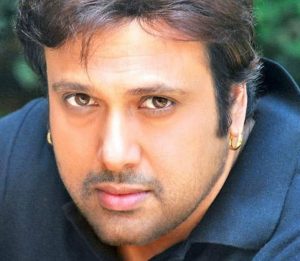 Govinda Facts:
*He is the youngest of six children.
*He is uncle to Bollywood actors Aarti Singh, Ragini Khanna, Krishna Abhishek and Aryan Singh.
*He has acted in over 165 Hindi films.
*He was voted #10 in a BBC News Online Survey to find out the Top 10 Greatest Stars of Stage and Screen of the last 1000 years.
*He was once engaged to actress Neelam in 1986.
*He acted on numerous projects with fellow Indian film actor Shakti Kapoor.
*Follow him on Twitter, Facebook and Instagram.