Irene Montala is a Spanish actress. She became recognized for her role in El Internado, a successful mystery series on Antena 3, during 2009. She played the role of Rebeca, a teacher that in the beginning seemed a calm person, but in fact she was a nazi fighter. Her notable roles in the films include Andalucía, Todo está en el aire, La mujer del anarquista, Body Armour, Tu vida en 65, A ras de suelo, Rottweiler, Nubes de verano, Lo mejor que le puede pasar a un cruasán, Una casa de locos or Fausto 5.0. She was born on July 18, 1976 in Barcelona, Barcelona, Catalonia, Spain, the daughter of Merce Montala. She studied interpretation with Manuel Lillo and Txiki Berrando. She has also studied dancing and singing. 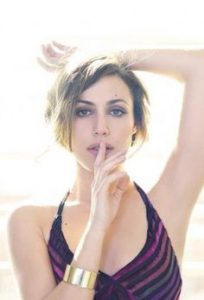 Irene Montala Education:
She studied interpretation with Manuel Lillo and Txiki Berrando.
She has studied English and french.

Irene Montala Facts:
*She is the daughter of actress Mercè Montalà.
*Her native languages are Spanish and catalan, although she has also studied English and french.
*Visit her official website: www.irenemontala.es
*Follow her on Twitter and Instagram.