Greer Garson was a British-American actress who won an Academy Award for Best Actress in 1942 for her title role in Mrs. Miniver. One of the most popular actresses of the World War II era, Garson was listed by the Motion Picture Herald as one of America’s top-ten box office draws from 1942 to 1946. Born Eileen Evelyn Greer Garson on September 29, 1904 in London, England, to Nancy Sophia and George Garson, a commercial clerk, she was of Scottish and Ulster-Scots descent. She attended and graduated from the University of London and studied at the University of Grenoble. After many stage appearances, Garson was signed to a contract with MGM. She became one of the studio’s top ten box office draws. She received seven Academy Award nominations and she won the award for Mrs. Miniver (1942). She died from heart failure at Presbyterian Hospital in Dallas, Texas, on April 6, 1996 at the age of 91. She was married three times. 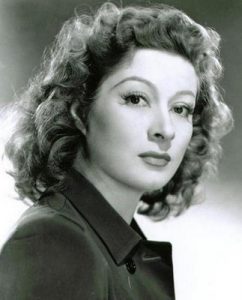 Greer Garson Facts:
*She was born on September 29, 1904 in London, England, UK.
*One of the most popular actress during the 1940s.
*She used to work for an advertising agency before appearing onstage in 1932.
*She became an American citizen in 1951.
*There is a Greer Garson Theater on the campus of Southern Methodist University in Dallas.
*She was a fan of the 1986 film Top Gun.
*She was honored as Turner Classic Movies Star of the Month for March 2013.
*She was awarded the CBE in the 1993 Queen’s Honours List for her services to drama and entertainment.