Peta Wilson is an Australian actress, model and lingerie designer. She is best known for her role as Nikita in the television series La Femme Nikita, which ran for five years and 96 episodes on the USA network. She played Anny Ondra in the 2002 television movie Joe and Max, and starred as the vampire Mina Harker in the 2003 film The League of Extraordinary Gentlemen. Born Peta Gia Wilson on November 18, 1970 in Sydney, New South Wales, Australia, she is the daughter of Karlene White Wilson and Darcy Wilson. Her parents divorced in 1982. She has one brother named Rob Wilson. She attended an all-girls Catholic school in Brisbane, Queensland, Australia. She worked as a model in Australia and in Europe, before she moved to Los Angeles in 1991. She had a son named Marlowe in February 2002 with her long-time boyfriend, director Damian Harris. 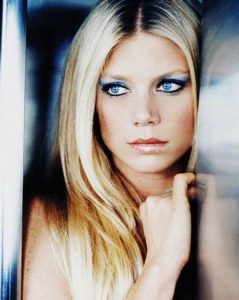 Peta Wilson Facts:
*She was born on November 18, 1970 in Sydney, New South Wales, Australia.
*Her father was a Warrant Officer in the Australian Army.
*At 17, she had a year-long battle with anorexia.
*She launched a lingerie label named Wylie Wilson, with a flagship store in Los Angeles, California in 2012.
*She enjoys scuba diving, swimming, horseback riding, cricket, painting and gardening.
*She lived with her long-time boyfriend, director Damian Harris, from 1997 to 2002.
*She has one son, Marlowe, with Damian Harris.