Greer Robson is a New Zealand actress. She is best known for her portrayal of Nurse Joanna Jordan in the television drama Shortland Street. She has also played prominent roles in the films Starlight Hotel, Klynham Summer, The Scarecrow and Queen City Rocker. Robson was a contestant in the third season of New Zealand version of Dancing with the Stars and won a season of Celebrity Treasure Island. Born on October 16, 1971 in New Zealand, she made her television debut at the age of two. Robson first achieved fame at the age of nine, starring as Georgie in the 1981 New Zealand film Smash Palace alongside Bruno Lawrence. She starred as Kate in the 1987 film Starlight Hotel, for which she won the New Zealand Film and Television Awards ‘Best Female Dramatic Performance in Film’. She studied both law and arts at the University of Auckland, graduating with Honours in her law degree. She later practiced as a solicitor in major corporate law firms in both Auckland and Sydney. Robson is married to Scott Kirk with whom she has three children Sienna, Indigo, and Hudson. 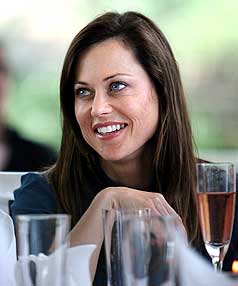 Greer Robson Facts:
*She was born on October 16, 1971 in New Zealand.
*She made her TV debut at two years of age.
*At age 9, she starred as Georgie Shaw in the 1981 thriller Smash Palace.
*She received a law degree from the University of Auckland.
*Her hobbies include Horse Riding and Skiing.