Hannah Hart is an American internet personality, comedian, actress and author, best known for starring in the weekly YouTube series My Drunk Kitchen in which she cooks something while intoxicated. Hart also runs a second channel where she talks about life in general and gives her opinions on many topics. In August 2014, Hart released her first parody cookbook titled ‘My Drunk Kitchen: A Guide to Eating, Drinking, and Going with Your Gut’, which became a New York Times Bestseller for Five Weeks. She is a 2017 recipient of the Alex Awards. Born Hannah Maud Hart on November 2, 1986 in San Francisco, California, to parents Annette and Noah B. Hart, she has one older sister named Naomi and a half-sister named Maggie. Hart completed her schooling from Burlingame High School (Burlingame, CA), and graduated with two degrees in English Literature and Japanese Language from the University of California, Berkeley in May 2009. In November 2016, she began dating buzzfeed video producer Ella Mielniczenko. 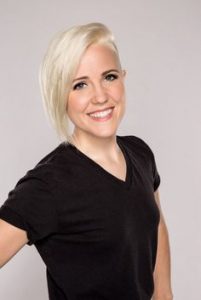 Hannah Hart Facts:
*She was born on November 2, 1986 in San Francisco, California, into a conservative Christian family.
*She is Ashkenazi Jewish on her father’s side.
*She was a proofreader at a translation firm in Manhattan before she started her YouTube career.
*She is best friends with Mamrie Hart and Grace Helbig.
*She enjoys singing.
*She released a memoir called Buffering: Unshared Tales of a Life Fully Loaded on October 18, 2016.
*Visit her official website: www.hannahhart.com
*Follow her on Twitter, YouTube, Facebook and Instagram.