Hannah Ware is a British actress. She is best known for television roles as Emma Kane in the Starz political drama series Boss, and as Sara Hanley in the ABC primetime soap opera Betrayal. She has also appeared in such films as Oldboy, Hitman: Agent 47, and 2017 film Aftermath. Born Hannah Rose Ware on December 2, 1982 in Hammersmith, London, UK, she is the daughter of Helena and John Ware, and older sister to singer/songwriter Jessie Ware. She is of English descent on her father’s side, and of Jewish descent on her mother’s side. She was educated at Alleyn’s School, a co-educational independent school in Dulwich in South London, then studied acting at the Lee Strasberg Theatre and Film Institute in New York. She had her film debut in 2010 in the Bruce Willis and Tracy Morgan comedy Cop Out. She was married to Jesse Jenkins from 2008 to 2009. 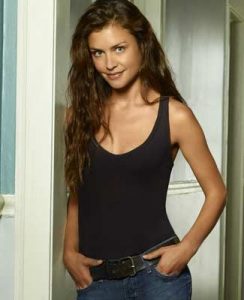 Hannah Ware Facts:
*She was born in Hammersmith, London and grew up in Clapham, London.
*Her sister is renowned R&B star Jessie Ware.
*Her parents divorced when she was 12 years old.