Hareem Farooq is a Pakistani actress of film and television. She is known for her roles in television, such as Tere Baghair, Mausam, Mere Humdum Mere Dost, Sanam, Dusri Bivi, and Dil-e-Beqarar, and in the films Siyaah, Dobara Phir Se and the 2017 Parchi. She won the Hum Award for Best Female Television Sensation in 2014. In 2017, she was signed on to become the official Spokesperson for Loreal Professional, Pakistan. 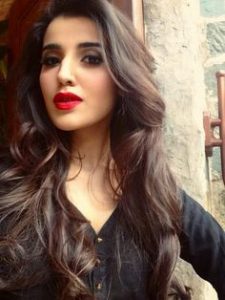 Hareem Farooq Facts:
*Her parents are both doctors.
*She began her career in the theater, portraying the lead role of Fatima Jinnah in Pawnay 14 August and Kiran in Aangan Terha.
*She had her screen debut in 2013 with a leading role in the horror thriller film Siyaah.
*Follow her on Twitter, Facebook and Instagram.