Bob Saget is a comedian, actor, and television host. He is best known for his role as Danny Tanner on the ABC sitcom Full House. He is also famous for hosting America’s Funniest Home Videos. From 2005 to 2014, he provided the voice of the future Ted Mosby on How I Met Your Mother. Born Robert Lane Saget on May 17, 1956 in Philadelphia, Pennsylvania, to Rosalyn and Benjamin Sage, his father was a supermarket executive, and his mother was a hospital administrator. He attended Rockbridge County High School before moving back to Philadelphia and graduating from Abington Senior High School. He married Sherri Kramer in 1982, and the couple had three children before divorcing in 1997. 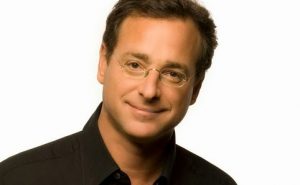 Bob Saget Facts:
*He belongs to Jewish family.
*His sister, Andrea Saget, died of an aneurysm at age 34. Two other siblings died in childbirth before he was born.
*He is friends with Daniel Morton, Alan Thicke, and Dana Delany.
*He was actually overweight at age twenty-two until a gangrenous appendix was taken out.
*Visit his official website: www.bobsaget.com
*Follow him on Twitter, Facebook, Myspace, and Instagram.