Harry Styles is a British singer-songwriter best known as a former member of the English-Irish pop boy band One Direction. His first solo single “Sign of the Times”, was released in May 2017. He was born to Anne Cox and Desmond Styles, on February 1 1994, in Redditch, Worcestershire as Harry Edward Styles. He grew up in Holmes Chapel, Cheshire, along with his older sister, Gemma. He studied at Holmes Chapel Comprehensive School. 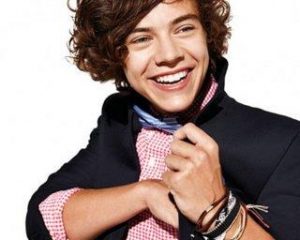 Harry Styles Facts:
*His parents separated when he was seven years old.
*He used to work for a bakery when he was sixteen years old.
*He rose to prominence after being a member of the band One Direction.
*He cites Elvis Presley, Foster the People, Coldplay and Kings of Leon as big influences.
*He was named #6 in Glamour’s list of “50 Sexiest Men” of 2013.
*He has a pet hamster, and a cat, Dusty.
*Follow him on Twitter, YouTube, Facebook and Instagram.