Heather Thomas is an American actress, screenwriter and author. She is best known for her portrayal of Jody Banks on the TV series The Fall Guy. She played Teri Marshall in the 1987 science fiction action film Cyclone. She released her book, Trophies, in April of 2008. Born Heather Anne Thomas in Greenwich, Connecticut, on September 8, 1957, she is the daughter of Gladdy Lou Ryder and Leon Thomas. After graduating from Santa Monica High School in Santa Monica, California, she attended UCLA School of Theater, Film and Television. Since October 10, 1992, she has been married to Harry M. Brittenham. She was previously married to Alan Rosenthal from 1985 to 1986. 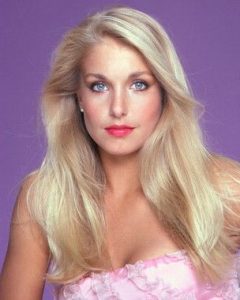 Heather Thomas Facts:
*She started acting at the age of 14.
*She is a graduated of Santa Monica High School and UCLA School of Theater, Film and Television.
*She was a member of the Chi Omega sorority while in UCLA.
*She was hit by a car in 1986, while crossing San Vincente Boulevard and suffered fractures to both legs.