Heidi Fleiss is an American former madam, television personality and columnist, regularly featured in the 1990s in American media. She is often referred to as the “Hollywood Madam”. She ran a high-class prostitution ring based in Los Angeles, California, that was exclusive to famous celebrities. Born Heidi Lynne Fleiss on December 30, 1965 in Los Feliz, California, USA, her father, Dr. Paul Fleiss, was a prominent L.A. pediatrician. She dropped out of high school in the 10th grade at the age of 16. She attended Valley College, followed by Santa Monica College. Since 2009, she has been in relationships with Dennis Hof. 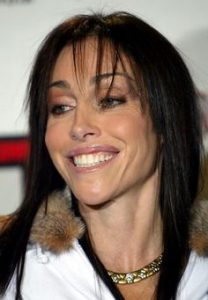 Heidi Fleiss Facts:
*She was born in Los Feliz, California, USA on December 30, 1965.
*She is of Jewish descent.
*She launched a line of clothing called Heidi Wear.
*She is a vegetarian.
*She used to work as a waitress, before beginning a relationship with financier Bernie Cornfeld.
*She attended the same high school as Bo Barrett, Julie Newmar, Anne-Marie Johnson, and Leonardo DiCaprio.