Hina Khan is an Indian actress of film and television. She is best known for playing Akshara in the TV serial Yeh Rishta Kya Kehlata Hai. In 2017, she participated in Bigg Boss 11 where she finished up as the 1st runner up. In 2017, she participated in the eighth season of Colors TV popular stunt based reality show Khatron Ke Khiladi where she ended as the runner-up losing to Shantanu Maheshwari. In 2018, Hina began portraying Komolika Chaubey in Star Plus’s Kasautii Zindagii Kay. Born on October 2, 1987 in Srinagar, Jammu and Kashmir, India, she has one younger brother named Aamir. Hina completed her Master of Business Administration (MBA) in 2009 at the CCA School of Management, Gurgaon, Delhi. She made her television debut in 2009, appearing in the Indian soap opera Yeh Rishta Kya Kehlata Hai as Akshara. In 2014, she began dating Yeh Rishta Kya Kehlata Hai’s supervising producer Rocky Jaiswal. 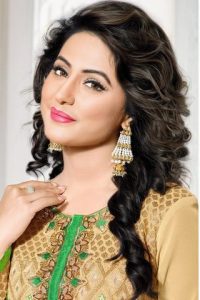 Hina Khan Facts:
*She was born on October 2, 1987 in Srinagar, Jammu and Kashmir, India.
*She earned her MBA from the CCA School of Management.
*She wanted to be a journalist.
*In 2014, she was awarded the Dada Saheb Phalke Award for Best Actress.
*In 2017, she participated in Bigg Boss 11.
*In 2017, she participated in Fear Factor India: Khatron Ke Khiladi season 8 and made it to the top 2.
*Follow her on Twitter, Facebook and Instagram.