Holly Hunter is an American actress best known for her role as Ada McGrath in the 1993 film The Piano, for which she won the Academy Award for Best Actress, BAFTA Award for Best Actress in a Leading Role, AACTA Award for Best Actress in a Leading Role, Golden Globe Award for Best Actress – Motion Picture Drama, and the Cannes Best Actress Award. She also earned Academy Award nominations for her roles in Broadcast News, The Firm, and Thirteen. Her other movie credits include Levity, Raising Arizona, Nine Lives, Always, Copycat, Jackie, Crash, O Brother, Jesus’ Son, Where Art Thou?, The Incredibles and Batman v Superman: Dawn of Justice. Holly was born to Opal Marguerite, a homemaker, and Charles Edwin Hunter, a farmer and sporting-goods manufacturer’s representative, in Conyers, Georgia. She is the youngest of seven children. Holly was married to Janusz Kaminski from 1995 to 2001. She has been in a relationship with Gordon MacDonald since 2001, the couple have twin sons, Press and Claude. 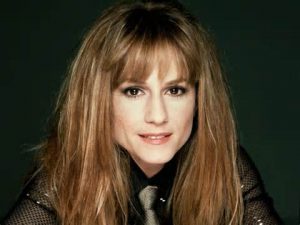 Holly Hunter Facts:
*She started playing piano when she was 9 years old.
*She moved to New York in 1980 to pursue a career in acting.
*She received a star on the Hollywood Walk of Fame on May 30, 2008.