Axl Rose is an American singer-songwriter and musician best known as the lead vocalist and founder of the hard rock band Guns N’ Roses, whose songs “Paradise City”, ‘Welcome to the Jungle’, and ‘Sweet Child o’ Mine’ went Platinum. Axl was born to Sharon Elizabeth and William Bruce Rose, on February 6, 1962 in Lafayette, Indiana, USA as William Bruce Rose, Jr. He belongs to Scottish, German, and Irish descent. He was married to Erin Everly from 1990 to 1991. 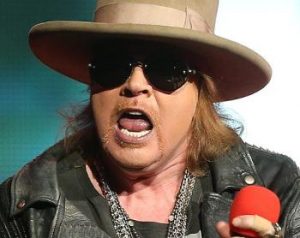 Axl Rose Facts:
*He is the founder and vocalist of Guns N’ Roses.
*He has Scottish, German, and Irish ancestry.
*He is a collector of Latin American religious artifacts, particularly crucifixes.
*He has been arrested over 30 times for various offenses, mostly drunk and disorderly and assault charges.
*He is a huge fan of Queen.
*Follow him on Twitter.

“I try to be respectful about getting an honor or recognition, but I don’t really know what the Rock Hall actually is. In my experience with the people who run it, I don’t see it having to do with anything other than them making money.” – Axl Rose