Holly Madison is a New York Times best-selling author, model, showgirl, and television personality. She is best known for being one of Hugh Hefner’s three girlfriends and for her appearance on the E! hit reality television show “The Girls Next Door”. She also had her own reality series, Holly’s World. She has appeared as a guest-star in several television shows such as CSI: Crime Scene Investigation, Celebrity Family Feud, Keeping Up with the Kardashians, Curb Your Enthusiasm, The Ellen DeGeneres Show, Entourage, General Hospital and in films such as Scary Movie 4 and The House Bunny. Madison released her first book and memoir, “Down the Rabbit Hole: Curious Adventures and Cautionary Tales of a Former Playboy Bunny”, in July 2015, followed by her second book, “The Vegas Diaries: Romance, Rolling the Dice and the Road to Reinvention” in May 2016. Born Hollin Sue Cullen on December 23, 1979 in Astoria, Oregon, to parents Patsy and Steve Cullen, she grew up in Alaska and Oregon. Madison studied theatre and psychology at Portland State University for two years and enrolled herself into Loyola Marymount University in Los Angeles in 1999. She has two children with Pasquale Rotella, whom she was married to from 2013 to 2019. 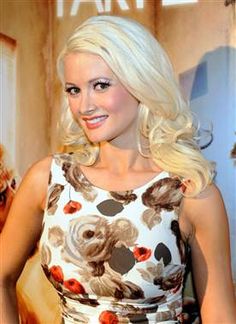 Holly Madison Facts:
*She was born on December 23, 1979 in Astoria, Oregon, USA.
*She is the oldest of three children.
*She attended Portland State University and Loyola Marymount University, majoring in theater and psychology.
*She was one of many girlfriends of the founder of Playboy magazine, Hugh Hefner.
*She is good friends with Angel Porrino, Josh Strickland, and Laura Croft.
*Her favorite books include The Great Gatsby, 1984 and Vanity Fair.
*Madison’s engagement ring was estimated to be worth nearly $2 million.
*She is a supporter of animal welfare and has posed for two of PETA’s anti-fur ads
*Visit her official website: www.hollymadison.com
*Follow her on Twitter, Facebook and Instagram.