Nick Jonas is an American singer, songwriter and actor, best known as a member of the pop rock band the Jonas Brothers, alongside his brothers Kevin and Joe. Jonas Brothers released their debut studio album It’s About Time through the Columbia label in 2006. Nick later formed a band known as Nick Jonas & the Administration, who released the album Who I Am in 2010. Jonas and his brothers made a guest appearance on the television show Hannah Montana, which broke records with over 10.7 million viewers, and played roles in Camp Rock. He has appeared in films such as Night at the Museum: Battle for the Smithsonian, Careful What You Wish For, Camp Rock and Camp Rock 2: The Final Jam. He has also appeared television series’ Last Man Standing and Hawaii Five-0, and starred in JONAS L.A., a Disney Channel original series. Born Nicholas Jerry Jonas on September 16, 1992 in Dallas, Texas, to parents Denise Jonas and Paul Kevin Jonas Sr., Jonas was raised alongside three brothers, Kevin, Joe and Frankie. He started acting in theater at the age of seven, and released his debut single in 2002. In December 2018, Jonas married Indian actress Priyanka Chopra. He was previously in a relationship with Miley Cyrus, Delta Goodrem, and Olivia Culpo. 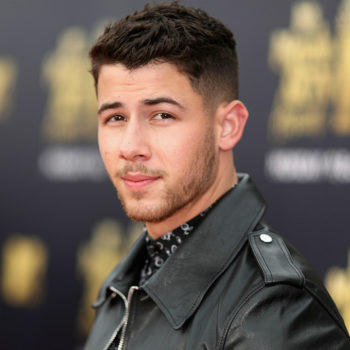 Nick Jonas Facts:
*He was born on September 16, 1992 in Dallas, Texas, USA.
*His parents are Denise Jonas and Paul Kevin Jonas Sr.
*His brothers are Kevin Jonas, Joe Jonas, and Frankie Jonas.
*He was discovered by a manager at the age of 7.
*One of the Jonas Brothers, a band formed with he and his brothers Kevin and Joe.
*His favorite musicians are Johnny Cash, Stevie Wonder, Fall Out Boy, Elvis Costello, and Switchfoot.
*His favorite song to play in concert is A Little Bit Longer.
*His favorite football teams are the Cowboys and the Giants.
*He ran with the bulls in Spain when he was 15.
*Visit his official website: www.nickjonas.com
*Follow him on Twitter, YouTube, Tumblr, Facebook and Instagram.