Actress and television producer who appeared in such television series as Picket Fences, Pretty Little Liars, As the World Turns, and Charmed. She is also known for her starring role as Jennifer Campbell in the 1992 film Dr. Giggles. She began her career as a model, appearing on commercials and print ads. Holly was born to David and Lauralei Combs in San Diego, California, USA, on December 3, 1973 as Holly Marie Combs. She belongs to Irish descent. She was married to David W. Donoho and Bryan Smith. 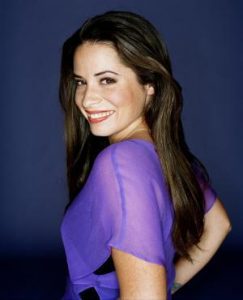 Holly Marie Combs Facts:
*Her father was seventeen and her mother was sixteen when she was born.
*She was once engaged to Storm Lyndon.
*In 2003, she was placed number 78 in Stuff magazines 103 sexiest women countdown.
*She is a big fan of huge Remy Zero.
*Her hobbies include horseback riding and gardening.
*She was ranked #62 in FHM’s 100 sexiest women countdown in 2002.
*She loves to watching horror movies.
*Follow her on Twitter and Instagram.