Mini Bio: Hrithik Roshan is an Indian actor who appears in Bollywood films. The son of the filmmaker Rakesh Roshan, Hrithik has established himself as one of the most successful actor in the Bollywood. He has won six Filmfare Awards, and is cited in the media as one of the most attractive male celebrities in India. After having appeared in films as a child actor in the 1980s, Roshan made his film debut in a leading role in Kaho Naa… Pyaar Hai in 2000, for which Roshan earned his Filmfare Awards for Best Actor and Best Male Debut. Other popular movies Roshan has acted in are Kabhi Khushi Kabhie Gham…, Koi… Mil Gaya, Krrish, Agneepath, and Dhoom 2, for which he won a Filmfare Award for Best Actor. He married Sussanne Khan in 2000, and the couple had two sons named Hridhaan and Hrehaan, before getting divorced in 2014. 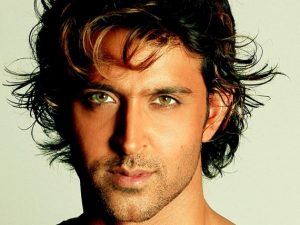 Hrithik Roshan Facts:
*He belongs to Punjabi descent.
*He has two thumbs on his right hand.
*He often supports charities of various kinds.
*He is excellent in dancing, and was a judge on the TV series Just Dance.
*He debuted as a playback singer in 2010 with his own film “Kites.”
*His role models are Shammi Kapoor, Sanjeev Kumar and Rajesh Khanna.
*He has done many commercials like Sony Ericsson, Mountain Dew, Acer and many more.
*He has been known to be called the Indian Sylvester Stallone, Brad Pitt and Michael Jackson rolled into one.
*He is the fifth Indian actor to have his statue at London’s Madame Tussauds Wax Museum.
*Follow him on Twitter, Facebook and Instagram.