Hubert Hurkacz is a Polish professional tennis player who achieved a career-high singles ranking of World No. 16 on April 5, 2021, and a doubles ranking of world No. 70 on April 5, 2021. Turning professional in 2015, Hurkacz is the current Polish #1 and is the first player from Poland to win an ATP Masters 1000 singles title, which he did at the 2021 Miami Open. Hurkacz’s best result in a Grand Slam has been reaching the semifinals, which he achieved at Wimbledon in 2021, beating world No. 2 Daniil Medvedev and world No. 8 Roger Federer in the fourth round and quarter final respectively. 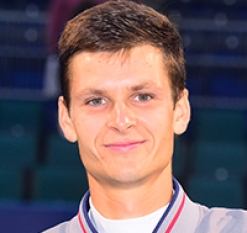 Hubert Hurkacz Facts:
*He was born on February 11, 1997 in Wroclaw, Poland.
*He began playing tennis at the age of five after his mother introduced him to the sport as she practiced.
*As a junior, he reached the 2015 Australian Open boys’ doubles final.
*He was the fifth Polish man to reach the Wimbledon quarterfinals.
*Follow him on Twitter, Facebook and Instagram.