Hugh Jackman is an Australian actor, singer, musician, dancer and producer. The Australian actor is most famous for his portrayal of Wolverine in the X-Men movie series. He’s also known for starring roles in the films Les Misérables, Prisoners, Kate & Leopold, The Fountain and The Prestige. For his performance in Les Misérables, he received an Academy Award nomination for Best Actor and a Golden Globe Award in 2013. He won a Tony Award for his work in The Boy from Oz. Born Hugh Michael Jackman on October 12, 1968 in Sydney, Australia to English immigrant parents Grace McNeil and Christopher John Jackman, he has two older brothers, Ian and Ralph, and two older sisters, Sonya and Zoe. He also has a younger half-sister, from his mother’s side of the family. He graduated from University of Technology in 1991 with a BA in Communications. He married Deborra-Lee Furness in April 1996 in Melbourne. They adopted two children, a son Oscar and a daughter Ava. 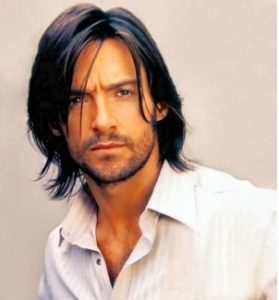 Hugh Jackman Facts:
*He is the youngest of five children.
*His parents got divorced when he was was eight years old.
*He enjoys playing kayaking and basketball.
*He is a philanthropist.
*He plays multiple sports, plays the guitar, piano and violin and does dancing.
*He hosted the 81st Academy Awards on 22 February 2009.
*He owns a production company, Seed Productions with John Palermo.
*He is good friends with Keith Urban, Nicole Kidman and Rupert Murdoch.
*People Magazine named him one of the top 50 Most Beautiful People in the World in 2000, 2001, 2002, 2003, and 2004.
*He was named People Magazine’s “Sexiest Man Alive” in 2008.
*He is a big fan of professional wrestling.
*He has two pets; Peaches (French bulldog) and JJ (bulldog).
*Follow him on Google+, Twitter, Facebook and Instagram.